If you have a chance, come check out Come Out & Play SF 2012, bringing city-sized fun to San Francisco this December 1st and 2nd at the SOMArts Cultural Center at 934 Brannan St. 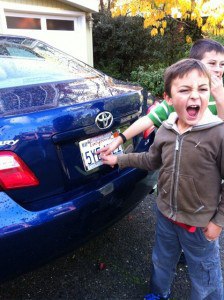 The Go Game has been a key participant in Come Out & Play since its first festival in New York City in 2006, and Come Out & Play's mission of bringing games and play to public space has always resonated closely with ours. This year's festival will be a ton of fun, and any fan of the Go Game will find a lot to play and enjoy.
This year, members of the Go Game have FOUR games in the festival! Our co-founder, Ian, created Alphabet City along with his 10-year-old daughter Lilah. It's kind of like I-Spy for letters, built on the Go Game's real-world game engine. Players search throughout the surrounding area for letters to photograph. The photos are shown off in a rotating photo slideshow at the Go Game gallery. Classic gameplay with a techie spin -- super fun for young kids!
Ian also created Pinkball with Heather Browning: a hilarious and energetic game involving enormous pink bouncy balls and long wooden sticks, and featuring the "slappyface rule": each player on the team can opt to whack a teammate with the ball one time in the course of the 15 minute game. 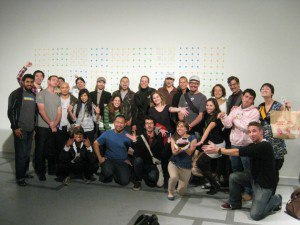 I (I'm Gabe! Hi world!) also have two games in the festival. The first, Undercover Assassins, went down this past Tuesday at the Trader Joe's mall at 555 Brannan. Undercover Assassins is part of a local group I organize called Undercover Street Games that regularly transforms public spaces into "incognito playgrounds." We run variants of well-known games like Capture the Flag, Assassins, relay races and easter egg hunts, in busy public places like malls, tourist spots, and plazas. All are for large groups: 40 to 150 players. And all are undercover: you can't do anything to reveal you're playing a game. No running, no shouting: players must remain hidden. This creates this incredibly blurring of game and reality, where you're not sure who is in on the game and who's just a bystander. They're all really accessible and family-friendly. 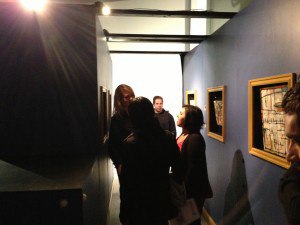 The second is The Hearst Collection, which was open for a public preview last week and is opening for private tours during the festival on December 1st and 2nd.  I needn't say much about this, as the reputation of the Hearst family surely precedes it, but we're really lucky to have such a fine gallery of exquisite art joining us all the way from Hearst Castle in San Simeon. A special security system has been installed to protect these masterworks -- the Hearst Security Group prides itself on having never had a painting stolen from one of its galleries, despite countless attempts.

There are dozens of other games in the festival, all worth checking out. Jericho, by Shannon Bruzelius, is a thrilling spy game with subterfuge and secret deliveries, along with a healthy dose of out-and-out NERF gun combat. Sixteen Tons is an elegant and striking installation game by Eric Zimmerman and Natalie Pozzi. Channel your inner cowgirl in WANTED by Catherine Herdlick, a text message based drama set in the age of the Pony Express. And be sure to check out the mind-bending Third-Person Outer Body Labyrinth by Jason Wilson, where you complete challenging puzzles while your vision is channeled through goggles that show you a third-person view of yourself. It's wild. Hope to see you there!