This fall The Go Game created a spectacular conference-wide game experience for SAP that united some of our best people (past and present) with our best practices. Called Knowledge Quest, the ongoing 4-day experience wove a game-layer throughout SAP’s TechEd user conference. The primary goals were to:

We were floored when we found out that our most famous Go Game alum and Gamification Guru, Jane McGonigal was going to be delivering the Keynote for TechEd! SAP is looking seriously at how game mechanics can be integrated to work, and who better to describe its virtues than Jane? And who better to build a game, and give attendees a hands-on tutorial in all things game-y than The Go Game? We’ve followed Jane’s career arc with great interest and enthusiasm over the years. She’s been a great flag-bearer for our industry and we like to think that we played a small part in her development as a game designer! It was so timely to have her encourage all the attendees to play Knowledge Quest the night before it kicked off. We’d spent the previous 2 months building a robust game engine that would host up to 5000 players at any given moment.

The design of the game was a slight departure for us. We included some of our fun scavenger-style and creative missions (wouldn’t really be a Go Game without it), but they took a backseat to the SAP-centric, content-driven challenges that made up a large part of the game. The attendees (few of whom know one another) are there to learn about what’s new at SAP, and it’s a packed 3 days. We literally saw dudes with their heads on fire. 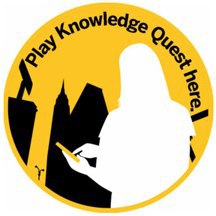 After each session, players would log into the game (via latop, tablet, phone) and answer questions (written by the presenter) about what they’d just learned. Viola – points! And you’ve reinforced what you just absorbed. Additionally, the players could fill out a survey of each session as part of the game (for points of course). The feedback will make next years’ TechEd even more insightful.
We built an intake site for the Session Teachers and the Exhibit Hall Partners to enter their unique content into the game in the form of ‘missions.’  This isn’t the first time we’ve gamified a trade show, so we knew it was going to be fun. Part information-sharing, part networking, these missions are a perfect case for why a ‘game-like’ interactions work so well in these instances. People want to network, and they want to talk about the products and services they use/sell, but approaching one another without the ‘grease’ of a game-layer can make the interactions feel forced or awkward. Nothing gets people out of their shells like fast, easy-to-complete challenges.

One of the most exciting part of the game was the ‘collective point goal’ where we aggregated everyone’s score. If the entire community of TechEd could rack up one million points, SAP would donate $20,000 to Kaboom, an awesome non-profit that builds playgrounds for kids who don’t have access to them. On day four, we passed a million! And there are some kids spinning on a tire somewhere who can thank a bunch of IT nerds in Vegas (and SAP of course)!
Here are some of the key stats:

For the English Majors out there, here’s a nice graphic of what attendees had to say about Knowledge Quest!

Thanks to everyone who made the game a reality – from Julie Barrier at SAP (who had the original vision) to Tamar Brown (who helped hammer the vision into an actual game) to David Yun and Finn (who build the thing) to Sasha and Roxy (who shepherded the project along and executed like the pros they are). We are pretty darn proud of this game, as you might have noticed. Looking forward to doing it all over again!