The key to a successful corporate reorganization consists of two elements in equal parts: seamless implementation and team member support of the initiative. Without the latter, a company risks investing time, energy and resources into a process that may not be adopted smoothly.
So after an ambitious reorganization effort to centralize its marketing operations, Wells Fargo recognized that each team within its marketing department needed an offsite to learn about moving forward and to help team members coalesce and rally around the new marketing organization.

With 21 employees scattered throughout multiple states—from California to North Carolina—the leaders from Wells Fargo Integrated Brand Marketing team saw the offsite as an opportunity to bring everyone together to cover both procedural changes (i.e. how new campaigns would run) and unite as a team. In particular, the organizers wanted a team-building activity that focused on mindfulness. 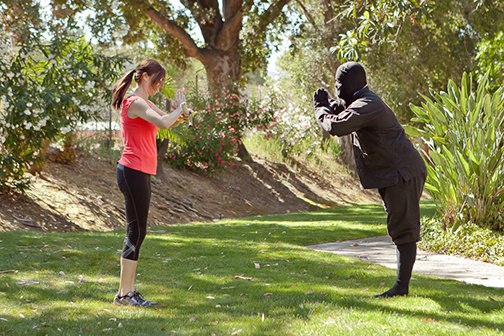 Larissa Acosta, segment marketing leader and one of the organizers, suggested the Letting Go Game as a way to close the event. But Acosta, who is new to her team, didn’t mention mindfulness to the group. Instead, she leveraged their curiosity to maintain momentum into the afternoon of the offsite’s second day. And after a morning of laborious workshops, the Letting Go Game began.

Acosta said, “Once we got through opening exercises, it was clear to me that it was going to work. From the way people were responding to the warm-up exercises, I knew they were having fun.”

The opportunity to set aside work for a few hours revealed new insights about everyone. “Being engaged in something that has nothing to do with your job and is focused on connection with the missions and the people on the team—that’s priceless,” explained Acosta. She recalled, “People talked a lot about the opportunity to get to know everyone better because we don’t all work together. There were some surprises as far as how some people responded to the missions, and new personality traits came to light.”

Afterward, the feedback was that it was refreshing to be outside and fun to do a team-building activity that was fresh, creative and unexpected. With mindfulness, the concept of the “beginners mind”—experiencing events as if for the first time—was especially welcome because of its rarity in finance where world experience is so highly valued.

We asked Acosta if she thought this exposure to mindfulness would have a long-term impact on her team, and she pointed out, “You just need to open the door for people, as far as what else is out there in how we perceive the world, perceive our day to day and the people you interact with. As long as you crack open that door and people have exposure to what is possible, the seeds will grow over time.”