We’re so excited about our partnership with HBO to create the “Hogwarts House Challenges” in which participants faced off in Harry Potter trivia and challenges in Atlanta, Boston, and Denver. Is The Go Game a part of the wizarding world? Not exactly. We’re Muggles still waiting for our letters from Hogwarts, but our costume collection rivals the wardrobe of any wizard and our gamerunners make magic happen every day. Yeah, yeah, we can’t levitate, but we help groups WIN(gardium leviosa) at team building, without the trust falls. And we don’t have magic wands, but we do have suitcases full of rubber chickens that we swish and flick around. 95% of the time things go perfectly well in our games, but when they don’t, we use 17 years of experience to transform a challenging situation into a magical experience. A few of our game producer wizards shared their magic tricks with us and told us about times they turned horror stories into magical moments. 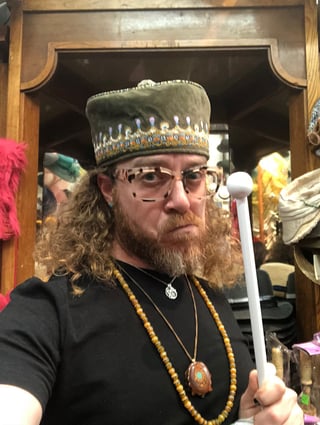 Spell(s) Used: Accio (A charm that allows the caster to summon an object)

Riddikulus charm (which transforms something scary into something silly)


Before a Classic Game, Seth tested and double checked a projector, but when he arrived at the game site, the projector didn’t work. (Sometimes our tech seems like it’s cursed by He Who Must Not Be Named.) Seth tried some magic spells (perhaps with a few four-letter words peppered in) but the projector wouldn’t turn on. No, Reparo (a simple spell to fix something that has been broken) didn’t work here. It was 5:00 pm, and Seth was far from the office in North Beach. A working projector was miles away in the Mission of San Francisco, and teams were headed back for the finale. But luckily, by some magic, Seth’s wizard sidekick Kelsey (The Go Game’s Office Manager) was still in the office after hours. Seth used Accio to get the projector from The Mission to North Beach, with the help of Kelsey.  Kelsey was able to hop in a Lyft (her broomstick was being repaired) and deliver Seth a new projector, just in time to screen the judging. (Can we get this girl a Triwizard Cup?!)


That wasn’t the only time Seth delivered magic. He helped the team to create a 530 person lip-dub music video in one hour and two takes (without the use of Hermione’s time turner), a task that is Riddikulus (which happens to be the name of the charm which transforms something scary into something silly).

Spell Used: Lumos ( A handy piece of magic that can turn a wand into a torch.)


Courtney’s magic comes from remaining professional and calm under pressure, finding quick solutions to difficult problems. Just like Lumos can turn a wand into a torch, Courtney figures out ways to turn simple tools into magical ones that can do a job bigger than what they were intended for. When Courtney was running a Movie Game for a well-known global tech giant, the plan was to screen the finished films at a hip movie house with an outdoor screening patio. A few obstacles came up: the cinema didn’t allow sound on their patio after 7:30pm (when the movies were supposed to be shown) but when that was resolved, the DVD made for the event didn’t work. Then, when Courtney tried to use her own computer to play the movies, the venue’s sound didn’t work through her laptop. She had the projection set up, but no sound. 130 people were waiting to screen their movies... in five minutes. And this is where Courtney got creative...and acrobatic. She found a projection booth window with a study overhang right outside. (With permission) Courtney climbed out the window to the edge of the overhang, above everyone’s heads and mounted a small speaker (usually used for less than 100 people, because they’re small and portable) on the overhang. She plugged the speaker cord into her computer, which was inside the projection booth.  Everyone could hear their movies well, the sound was at a respectable level, and Courtney didn’t fall off the overhang. (If only she could have Apparated….)


While Courtney broke a sweat (figuratively and literally) the group had no idea. That’s the real magic of a gamerunner. She says, “I come at each game like a stage performance. What goes on backstage is not for the audience to worry about; as long as the show they experience seems to go off without a hitch, that’s what counts.” 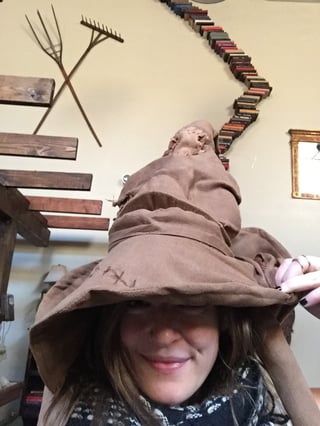 
Spell Used: Impedimenta (A spell to stop or slow down any person or creature by temporarily immobilising them)


Bump and fellow gamerunner Leah were running a 15-team game for 125 NYC freshmen on their first week of school in Grand Central Station. The building is a known low-reception gamezone, so Bump knew she'd have to pull some straggler media and work some speedy tech magic before the finale presentation. But some other cursed tech issues made the process of pulling media from game phones to the finale presentation more difficult than usual. The school bell was set to ring in 90 minutes and Bump had to distract the kids while Leah worked on the tech. Enter Impedimenta (a spell to stop or slow down any person or creature by temporarily immobilising them). No, Bump didn’t freeze 125 ninth graders, but she did distract them to slow down time. She hopped on the mic and started engaging the kids in an interactive conversation; she made them perform their team cheers, asked them what they learned about Grand Central Station, and had the students teach her slang words that she was too "old" to know. She did this for 60 minutes before the media was ready. (Yes, an hour of live entertainment.) They finished presentations as the bell rang, signaling the end of the school day.


Erin and Leah drank a lot of butter beer that night!


If your company hates team building, we’ll wave our wands and use the Riddikulus charm (which transforms something scary into something silly). Learn about how we play (like it’s our job) at thegogame.com.


Have you transformed a horror story into a magical moment?  Share your own Harry Potter heroic story with us in the comments!  And if you have any connections at Hogwarts...we will apparate to platform platform 9¾ in a flash.