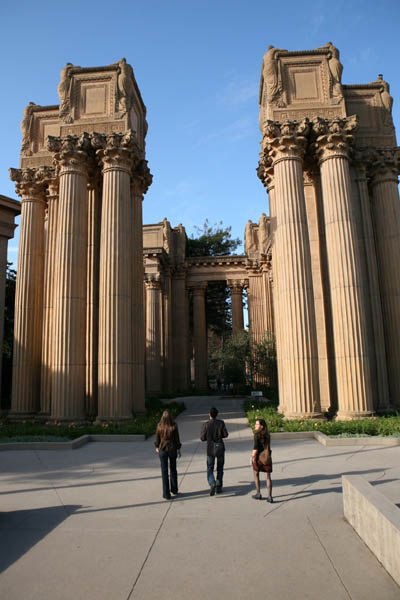 An App Proposal to Remember

Eli's Birthday Go Game Extravaganza began as a any Go Game iPhone Urban Adventure game might begin. After breaking into 4 teams, participants headed out to complete a range of different challenges, from Eli specific trivia to animal impersonations to location based puzzles. All missions were solved on foot in the Marina district of San Francisco.
Unbeknownst to Eli's girlfriend Stacy, Eli's Birthday Go Game Extravaganza included an extra special mission. Midway through the action, the game directed Eli's team (Eli, Stacy, Eli's sister and her boyfriend) to the Palace of Fine Arts Rotunda:

When Eli saw the text appear, his heart rate elevated noticeably. On the way, Stacy casually quipped to Eli that the Rotunda is where he should propose to her when the time came. Perfect! Eli was, in fact, about to propose.
Before the big moment, there was an elaborate custom puzzle to be solved, one specially inserted into the game just for Eli by the crack team at the Go Game. The puzzle read: "To complete the next challenge, head to the palace of Fine Arts Rotunda and follow its benefactors 'round the earth with cypher in hand." The phone specified the answer to the puzzle was a question and should be submitted in the form of a photo. With a bit of help from Eli, the team used plaques on the ground and compass orientations to decode a cryptic message. 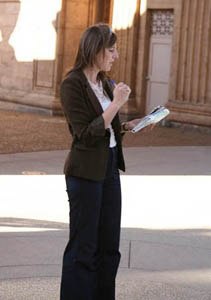 Stacy deciphered the last letter to reveal the puzzle's answer ("Gotcha, I do!") and turned to Eli quizzically, still unclear as to what question they were supposed to take a picture of. She found find him one knee, ring in hand. 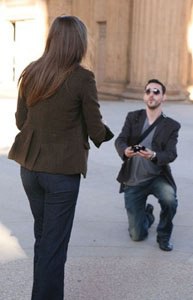 After freezing for 15 seconds, Stacy joined him on the ground to accept his proposal. 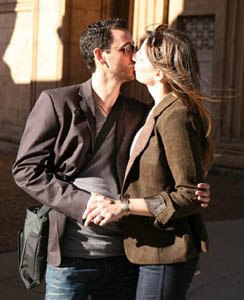 Post proposal and quick celebration, it was time to say goodbye to the Rotunda and head back to meet up with the other teams and view the photos and videos created during the day.
The game's final instruction promised that no one would leave the event "empty-fingered." Back at the final celebration, Eli and Stacy accepted congratulations all around as the big winners of the day. However, as promised, no one left the game without a prize: there were ring pops for all!
Special thanks to the crew at the Go Game, who went well above and beyond the call of duty to put together the final custom mission; Alexandra Dixon, puzzle guru extraordinaire who provided the scouting photos of the plaques and the basis for the puzzle; Ethan burns for documenting the event with great photos; and Debbie Goldstein, for helping to pull it all together. 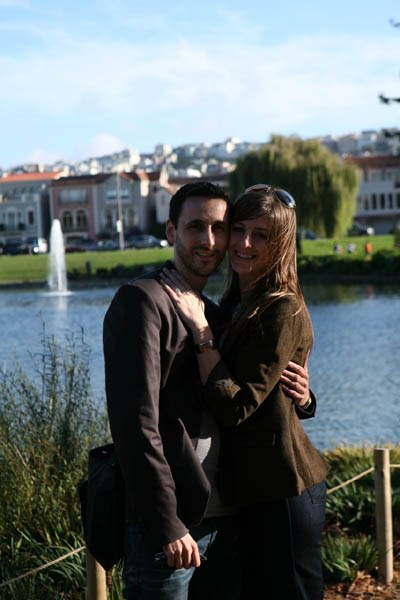 Editor's note: The above was adapted from Eli's own words. We'd like to add the following: Bam -- a proposal for the ages people! We've polled a lot of people about how freaking awesome this idea was, and even the dudiest of dudes concede that Eli's plan was splendiferous. It was crafty, experiential, unexpected and romantic all that the same time. The Go Game executes hundreds of games each year, the vast majority of which are for intimidating big-name clients -- high pressure stuff. This game, however, was a complete white knuckle ride for the administrators. Would she say yes? What was taking them so long? Riveting drama... and with the happiest of endings!