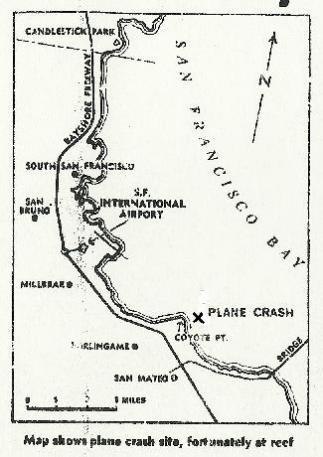 I originally intended this entry as the start of a series of retrospectives. It'd be impossible to walk away from 6 years and 400 Go Games without a good story to tell(or twenty). (For the record, this plane is not a crash metaphor for my time here at The Go Game.)
However, my daily perusal of the Chronicle led me to something I can't pass up. (Hey, it's a bit of a guilty pleasure, but it did lead me to find this gem once upon a time.) Anytime you see a lumberjack, wedding, or ninja in San Francisco, you've most likely just played The Go Game (at least, if you see a lumberjack, wedding, or ninja in a place you might not expect to find one).
In making the magic of The Go Game happen, we fly. A lot. (If you ever have troubling remembering "a lot" versus "alot" read this brilliant comic.) Seeing as the vast majority of us live in San Francisco proper, we see a lot (a lot!) of SFO. Sorry, OAK. But look how pretty SFO is now!The vast majority of the time, your landing approach at SFO is South to North over the water, which means landing on one of these runways:  Which means your plane at some point is doing this:  ... and if you haven't done that a couple of times, it can be a tad unnverving. Even having made the landing a couple hundred times, I can't help but wonder, "what if..."
Thanks to the Chronicle archives, now I know what happens if you happen to come up just a bit short (3 miles?) on that approach:

In a case of refreshing honesty,  the pilot of the plane told the NTSB, "As you Americans say, I f---ed up." Also worth noting: they patched that plane right up and flew it another couple of decades.