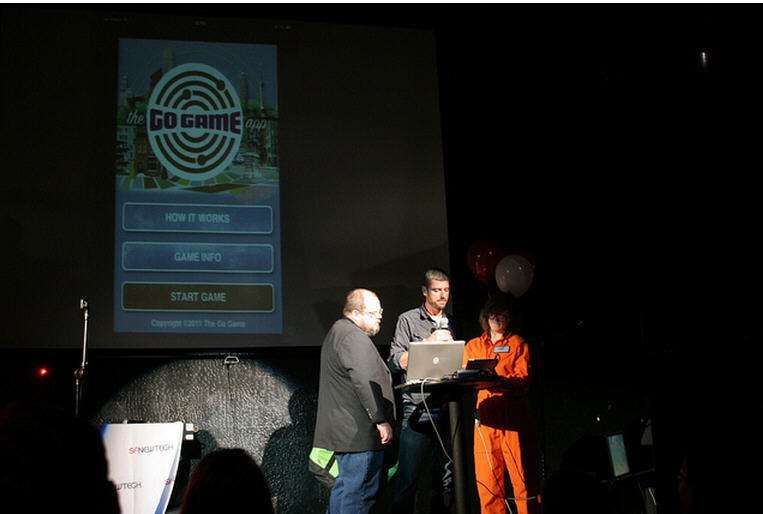 On Wednesday, we were quite honored to present The Go Game App at SF New Tech -- the longest-running technology get together in SF. It also happens to be my old friend Myles Weissleder's baby. I've been a couple times in the past and really enjoyed it. Plus there are free tacos, which truly make ups the awesome factor. And Myles is a super gracious guy, passionate about technology and full of interesting questions. If you've never been, you should check it out.
To be honest, at first we weren't sure if we belonged at this event. These are clearly the brains of the tech industry, the sleep-deprived engineers,  overachieving 22-year-old CEO's, and a few VC suits just to keep the whole thing kosher. When we arrived, the smell of tacos wafted through the large Mighty space, with excited start-ups pitching their latest and greatest to anyone within earshot. Immediately we were charmed by the amazing SF New Tech team, who graciously had beers and tacos in our hands in mere moments (special thanks to Amy @SFNT for being so on top of everything!). We soon realized that we did indeed belong, as our sexy app fit in perfectly with the other presentations.
David Moles, one half of our amazing David Programming team, and I took the stage and demo'd the new Go Game App (thanks @kieren for the photo). Well, we demo'd one creative mission only, since we only had 5 minutes and I got to talking. And you know I likes to talk.

We showed our 'Explainer' video that we love. I know you are as excited as we are to finally have the app, so we made a long version and a short version. You probably also know that we love feedback (product of having team building games, I guess) so let us know which strikes you as more effective. The original is 2 minutes, so we were encouraged to make a 1-minuter for the attention deprived. ADD peeps, you're welcome.
The main point of the preso was to show how this iPhone app is really a bold new step towards scalability for The Go Game. Way back when, we thought running 2 events in the same day was scaling! Then, when Finn made 'The Cluster' (versus linear game technology) we thought we'd scaled. Now, the iPhone App version of the game can scale in a whole new way. There's now really no limit to how many groups can use any given gamezone in a given night. I look forward to solving this awesome problem: you've got 10 games happening in one city on a given Friday night, and not enough venues to host all the Agent Hotpantses.
We were lucky enough to catch the presentations of some pretty amazing up-and-comers. Flowdock, Repost-Us, TryMyUI, Sococo, Let's Lunch and ToutSuite all did a fantastic job discussing their various claims to fame. Flowdock lets you connect super fast with your company; Repost-Us branches us out millions via social media, overcoming the concern of low followers; TryMyUI hires and videotapes Average Joe looking at your website, explaining what they see and how they like the page, all while they provide direct feedback; Sococo turns your office into an avatar-like space, tapping into "offices" and meetings all online; Let's Lunch, the latest crush for TechCrunch, connects compelling and successful professionals with like-minded, yet usually unobtainable people -- example: Drop Box Founder meets Founder of Scribd.com -- all orchestrated by them; and ToutSuite connects customers with creators, such as streaming video between groups wine tasting all over the world. It was some pretty exciting stuff, especially with live Tweeting blasted on the wall behind presenters. Ah technology.
As for our App, we are beyond elated to say that it will be up and ready oh so soon! We're in soft launch right now, and testing on lots of live groups. If you have a party/gathering and you'd like  to play, let us know and we'll send you some free game codes!
Were you able to make the SFNT event, or watch via stream? Have any questions? Bueller?