A Day in the Life of a Go Game Producer 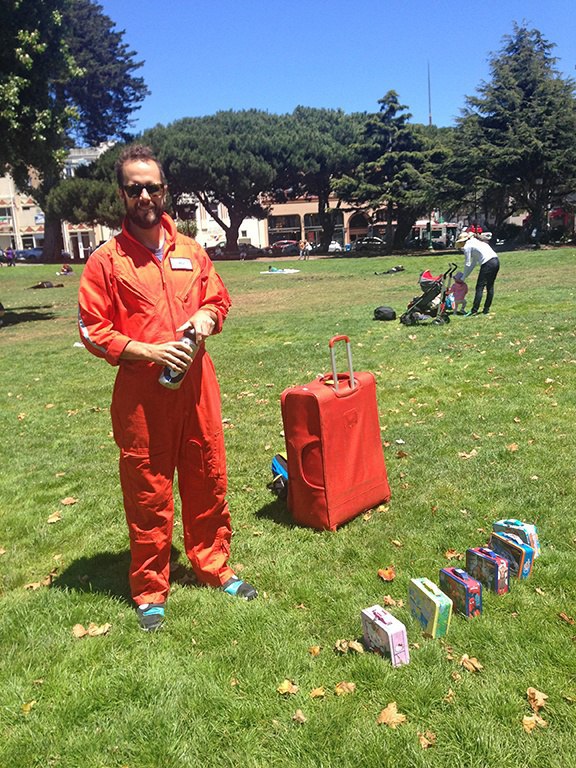 Kelly Rogala has six lunch boxes lined up in front of him—a couple of Sponge Bobs, Hello Kitty, Spider Man and—my personal favorite, just because I didn’t know there was such a thing—a John Cena. He loads each one with guidelines and iphones. And so goes the preparation of a game producer, or “game runnah,” as Kelly calls himself. Today, he’s heading to San Francisco’s North Beach for an afternoon of corporate team building.

On a laptop, he shows me Breadcrumb, The Go Games’ proprietary software in which he’s already set up today’s Classic Go Game  for Ernst & Young, tailored for the client after a preparatory interview during which he asked questions like, “Is anyone on your team hyper competitive?” and “On a scale of Disneyland at one end and a bachelorette party at the other, where does your organization align?” Just as Kelly starts to show me one of the tabs where he can customize each game, the software malfunctions. We stare at a spinning arrow for moment quietly.

Kelly slaps his forehead (who does that?) and gets one of The Go Games’ full-time coders on the phone who fixes the issue immediately. And the next thing I notice is that he’s hopped into the Karaoke Rickshaw to help Go Game co-founder Ian Fraser  with something while also looking for a microphone to pack with the lunch boxes. “Unflappable multitasker” must be part of the game runner job description. 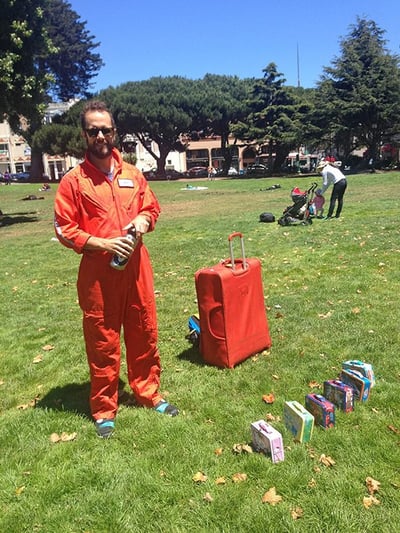 Just before we head out, Kelly dons a bright orange jump suit and grabs a large orange suitcase on wheels. At 6’3” with a curly faux hawk and turquoise Nike HyperRevs, this ensemble totally works. Kelly admits that he gets the thumbs up all the time from random people on the street. “People think the jumpsuit is my thing,” he says. He glances down at himself, laughs and adds, “I guess it is my thing.”

Our car pulls up at Washington Square, and Kelly rolls his luggage over toward a large group obviously congregated in anticipation of something. While we wait for a few Ernst & Young stragglers, Kelly lines up the lunch boxes on the ground and describes what he loves about being a game producer for The Go Game: “My job is to play with people, which is a miracle.” He tells me stories about events he’s run with spontaneous synchronized swimming in a kiddie pool or invented-on-the-spot invisible limbo. I learn about a massive pillow fight he orchestrated in Beverly Hills. “I deliver peak experience. It’s a unicorn job,” he says. 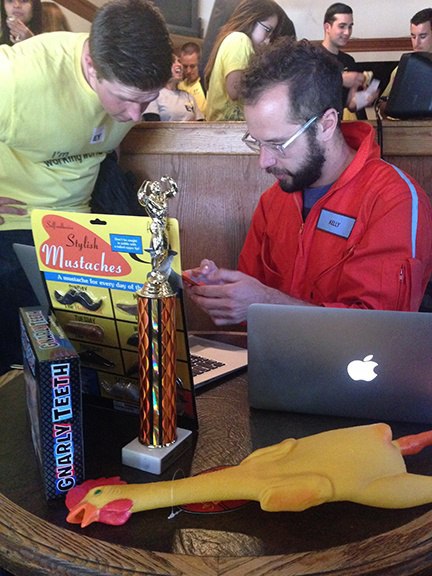 At game time, Kelly delivers his opening lines, promising “prolonged eye gazing, trust falls and synchronized breathing.” The group giggles nervously. He switches gears, describing The Go Game as a cross between television’s The Amazing Race, the board game Cranium and a good old-fashioned scavenger hunt on steroids. Then Kelly hits them with a few tips—such as being respectful in public places and not getting arrested—and off they trot, lunch boxes and iphones in hand.

As we watch them go, Kelly says, almost wistfully, “They’re about to have so much fun.” The two of us walk over to a bar on the park’s corner where one of The Go Games’ actors, a “plant” in industry speak, is hidden in plain sight at a table under the awning outside, waiting to be discovered by the game’s participants.

We head inside to a private back room, where Kelly sets up a projector and screen, two computers and a headset microphone—all the while monitoring the teams on Breadcrumb as they progress. Now I see how he can control the elements—sneaks (location-based clues), creative challenges (tasks solved by taking photos or making short videos), head-to-head challenges with other teams, secret agent meetings (the plants) and trivia—to help move the teams along in the moment and improve their experiences. The elements are scaled for points, and each team is hustling to earn the most points. But, before any winners are declared, there’s also team judging of the creative elements (hence the screen) once everyone finishes and meets up at the bar. It’s a lot of moving parts, sometimes in unknown cities and with unpredictable weather. And that, Kelly admits, is the hardest part of the job.

Eventually, the teams regroup at the bar. I hear the phrase “so much fun” repeatedly at high volume—and this time it’s not Kelly talking. While beers and food appear, Kelly manages what could easily fall into chaos. He’s mic’d up and has teams chanting their names and stopping on cue, conducting as if it’s an orchestral performance. With his other three or four hands, he’s deejaying music on one computer, screening the teams’ photos and videos on another and watching their votes transfer from the team iphones into his iphone.

It’s insanity. People are going berserk as they watch the action unfold onscreen, and Kelly is somehow doing stand-up comedy, navigating what would be a technological cluster for most mortals and propelling the event toward an award ceremony—during which he manages to convince the last-place team captain to drink beer from a rubber chicken (a first, Kelly claims jubilantly).

Afterward, Kelly wipes beer from his computer cables and packs the lunch boxes and everything else back into the orange suitcase. Mission complete. And while we head back to The Go Games HQ, I try to make sense of what I’ve just witnessed.

Earlier in the day, Kelly warned me that people don’t understand The Go Game until it’s delivered. Even now after I’ve seen it, I can’t offer any suggestions to solve that problem. How do you convince people to suspend all skepticism about team building? “That’s why,” Kelly says, “the sooner I can put the play into the hands of the clients, the more fun they’re going to have.”