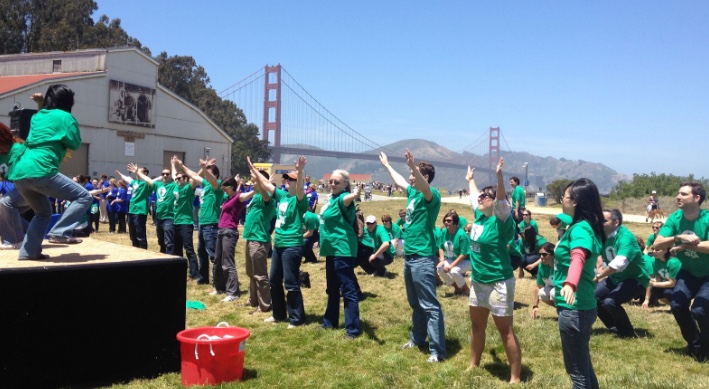 Does your team need to let loose? Are you looking to help your colleagues bond or boost morale? Let us warm them up and break the ice. We’re experts in networking that actually works. Our Game Producers can kick off any of our games with some smaller icebreakers that won’t make your team roll their eyes.

From our Classic Game to Game Shows, Music Video to Spy Games;  here are a few of our favorite icebreakers to use at the office.

What it does: Helps your team discover things they have in common. This game is great for strangers as well as teams who already know each other, since they will still learn something new about their teammates and it promotes immediate inclusion.

What you need: Space to move around

What to expect: Loud noise/cheering

How to play: Divide the group into even teams of about four to five people. If possible, try to make sure people who are already close are not on the same team. Give teams three minutes to talk amongst themselves to find five things that every single person in the group has in common with the other members. Make it more difficult and meaningful by asking them to avoid the obvious: height, hair color, the shoes they are wearing, etc. There are a few ways to play this game. You can play it as a race as have teams compete to come up with their similarities first. Then the game will end once all teams have found their similarities. Or, once all initial groups have found their similarities, you can have them combine with another group and again find their similarities in the larger group, this time with a higher number and more time. This can be done multiple times in large groups.

What it does: Helps teammates learn new fun facts about each other.

What you need: Notecards/paper and pens.

What to expect: An increase in knowledge about each other, laughs.

How to play: On a notecard or piece of paper, each person on your team should write down something interesting they’ve done. Some examples: I have milked a cow. I have lived in seven countries. I have eaten cow brain. Put all the cards in a hat (or bowl), and shake them up. Everyone will draw a card and read it aloud. If they pull their own have them pull another. The reader of the card should guess “who done it” and explain why they chose that person. If they guess incorrectly three times, they can open it up to the rest of the group to help.

What it does: Increases energy and encourages cheering each other on and team celebration. This game is great for any group, whether they know each other or not.

What you need: A space in which people can move around and be loud.

What to expect: Loud noise and big energy.

How to play: Go over the rules of rock, paper, scissors. Everyone starts by battling one person in rock, paper, scissors. Whoever loses becomes the biggest fan of their competitor and becomes their cheering squad, chanting their name. The winner battles another winner, and whoever wins that acquires the fans of the person who loses. This goes on until there are two people left. At this point each person will have a big cheering squad with their biggest fans. Have them battle in a best out of three challenge. Whoever wins acquires everyone as their biggest fan. 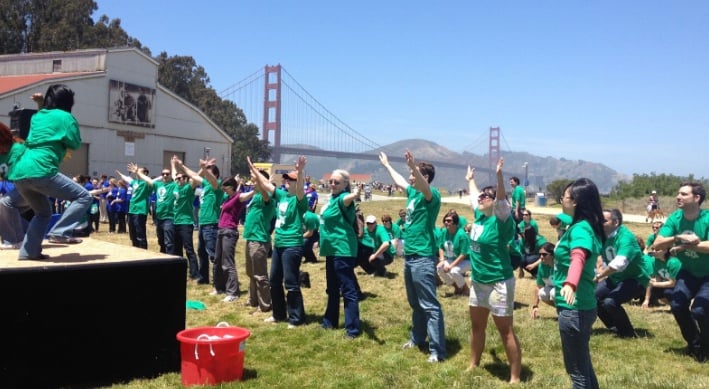 What it does: Gets people moving around and talking to people quickly.

What you need:  A space in which people can move around and be loud. Bingo cards or a 5 x 5 grid that looks like a bingo card. Each square should be filled in with qualifiers like “plays an instrument” or “has been to South America”. If you know a lot about your team you can be more specific. If not, keep them general. A pen per person.

What to expect: It gets loud! Since this is a race, some people might get very competitive.

How to play: Each participant will get a bingo card that has the squares filled in the qualifiers. They must go talk to other teammates to find out if they fulfill one of the squares. For example, if “Jeff” plays guitar, he can sign his name in the “plays an instrument” square. Like regular bingo, the first person to get five in a row, horizontal, vertical, or diagonal wins. Or, you can choose a number of squares to be signed if you don’t want to play by bingo rules.

What it does: Helps groups learn about each other quickly and find commonalities.

What you need: Toilet paper. This can also be done with shoelaces or string.

What to expect: Laughter, especially when you initially pull out the toilet paper.  Some people initially might be uncomfortable being in the spotlight and might need support.

How to play: Pass a roll of toilet paper around the room and ask everyone  tear off how much they normally use when going to the toilet. (You can also pass around string and ask them to cut it to a length of their choice, or they can remove their shoelace for length.)  After everyone has their paper, they will share one interesting fact about themselves for each piece of toilet paper they have. (If it’s string or shoelaces, it will be about one fact per inch. Of course this can be estimated.)

What it does: Helps strangers bond quickly, or create deeper connections between teammates who already know each other.

What you need: Pen and paper, and space to sit

What to expect: Lots of laughs

How to play: Groups of two should sit across from each other with pen and paper in hand. The partners will draw a portrait of the person sitting across from them simultaneously. The catch is that they cannot look down at the paper, they cannot lift their pen (so the line is continuous). Give everyone one minute to complete their drawing. Then everyone puts their pens down and shows off their works of art. You can have everyone write the name of their partner on their portraits and add three positive qualities they observed. Then they can sign their work and exchange the masterpieces. Have some empty wall space? Hang them in the office, with consent.

Looking for more ideas? Book one of our games here and our expert game runners will facilitate their favorites ice-breakers before your game!