How to Build Trust in the Workplace

In elementary school, we probably all had few teachers who said, “There’s no such thing as a dumb question.” And, as kids, every time we heard that line, there was a collective eye roll. But in spite of the inherent snarkiness of adolescence, the point was made: No one deserves to be ridiculed for being curious. It’s a good rule. And it’s one way that teachers create what’s known as psychological safety in their classrooms. The intent is to foster a space where students can feel confident that no one will embarrass, reject or punish them for speaking up. 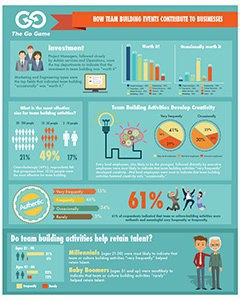 See why you should incorporate team building events into your overall business strategy this year to retain talent, develop creativity and more.

You may have noticed that we have an unconventional approach to most everything. We cruise the streets in orange jumpsuits. We often travel with rubber chickens in our luggage. And we don’t subscribe to the standard rating scale of 1 to 10. You know the one, it might go something like this: On a scale of 1 to 10, with 10 being the most positive, how would you rate your overall experience at The Door to Hell? Instead of the conventional 1 to 10, we created a superior ranking system of 1 to 6 for four reasons:

Maybe you missed the big news back in 2013, but the whole left brain/right brain theory isn’t as simple as we were led to believe. Sure, one side does some heavy lifting when, for example, counting out loud (that’s the left), but neuroscientists now say that the two hemispheres mostly work together. Well, sort of. Actually, scientists think that the hemispheres work semi-independently to solve problems, each side of the brain taking a different approach. In this fashion, we use both sides of our brain almost all of the time in an interactive cognitive process. So if creative thinking doesn’t come from the right side of the brain, where does it happen and why do we care? Let’s answer the second question first: Because creative thinking is highly valuable in most workplaces—at least the creative cultures that require more than funky furniture and a laid-back dress code. And, it turns out, that happy employees just might be your most creative employees. Now back to the first question: One recent study, done in an fMRI scanner with jazz musicians improvising together, found the first item of interest: Playing free-form improv slowed down activity in their brains’ dorsolateral prefrontal cortex (DLPFC), which is the mothering part of the brain that plans and self-censors. (Makes sense. Right?) The DLPFC is involved in risk, moral and cost-and-benefit decision making. It’s also a section of the brain that takes ridiculously long to develop, which explains the questionable judgment of teenagers. In another recent study, also done with fMRI and jazz musicians, neuroscientists showed musicians photos of “an actress representing a positive, negative or ambiguous emotion” before they began playing music. What these researchers discovered is that emotion has an impact on the actual way our brains act when being creative. The sad photo stimulated connectivity between the insula, the spot that manages visceral awareness, and the substantia nigra, an area that oversees pleasure and reward (which explains the prevalence of break-up songs in society). And the positive emotion deactivated the DLPFC the most, meaning that happiness set the scene for a deeper state of creative flow by shutting down the brain’s mothering tendencies. To extrapolate from these studies and transfer the findings to the workplace, it would make sense that happy employees, surrounded by positivity, are likely to be the most creative because they’ll be able to deactivate more of the DLPFC. The moral? Hire happy people. And keep them that way—unless you’re in the music industry.

Why is Play So Important?!

Our allies at NPR and TED talks have compiled a solid collection of episodes about PLAY and its power to change us, including Go Game alum Jane McGonigal. Take a listen!